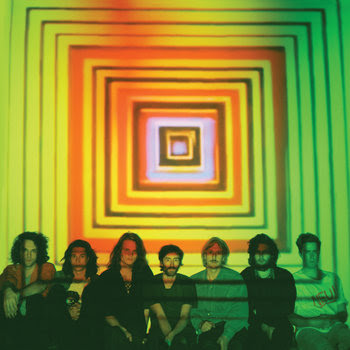 What a great and utterly lovable, shaggy beast this album is!  Hard psychedelia (yes, even a sitar on the final track), garage rock, a bit of pop and R&B.  All done with a scruffy swagger and deserved confidence.  Fill Your Lungs has all the elements of an album that will not leave your music rotation for a very, very long time.

The smorgasbord commences with the 16 minute "Head On/Pill", which offers the listener an epic musical journey through the psychedelic world of Melbourne's King Gizzard & The Lizard Wizard.  The following three tracks, including the first track provided below, continue to paint in psychedelic colors, although with plenty of variation including drone/shoegaze and blues.  On "Let Me Mend the Past" the band nimbly dances through an R&B flavored romp.  Then, in one of my favorites, the band swaggers through the garage stomper "Mystery Jack".  We have already featured singles "30 Past 7" and "I'm Not A Man Unless I Have A Woman", so we'll feature a couple of other tracks.  You can stream/buy the entire album at the Bandcamp link below.