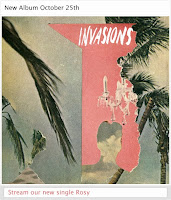 INVASIONS are a Canadian garage rock band who wears a ska/Clash influence proudly. They've just released a song, "Rosy" for you to check out:

Here's an earlier song, "Ballad of the Faithful" - a little slower tempo, but similar guitar, backbeat and some Farfisa-style keyboards:

And a video of them performing "Cursed Comfort", just so you can see they bring it across live, too:

They're putting out their debut album this week - based on these songs, hopes are high. They'll be playing an album release show and several other dates in Canada soon - you can read all about it at their website - links below.