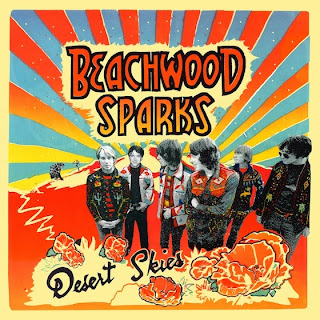 Beachwood Sparks, formed in 1997 in Southern California, was a sweet reminder of the beauty of good California psychedelic country rock and their self-titled album set them up as heirs to the grand traditions of the Byrds and Flying Burrito Brothers. Unknown to me until now was that the self-titled album was not their first. Their first album was Desert Skies.

It was recorded by the original six piece line up of Brent Rademaker (bass/vocals), Chris Gunst (guitar/vocals), "Farmer Dave" Scher (lap steel/organ/vocals), Josh Schwartz (guitar/vocals), Pete "Sleigher" Kinne (percussion/vocals) and Tom Sanford (drums/vocals). Untitled at the time, the record was made at Josh's studio "The Space Shed", in Sierra Madre. It was originally intended for release on the Christmas/xmAs label run by Brent out of his house, but that never worked out.

Fortunately for us, this is now being remedied, with Desert Skies set for a release date of November 26. Right now, you can check out an advance track, "Make It Together":

It's actually fantastic, and it's on Alive/Naturalsound - home of some of WYMA's absolute favorites (Swamp Dogg, Lee Bains III, John the Conqueror) - you can learn more, and pre-order the limited edition colored vinyl at the links below.