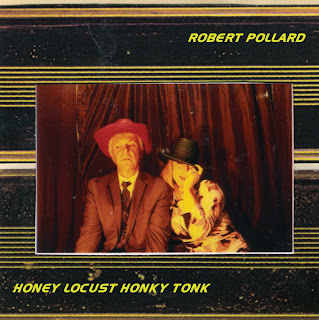 Robert Pollard's 19th solo outing is Honey Locust Honky Tonk. As has been the case for quite some time, Pollard is perfectly willing to get his Circus Devils in his Pollard, or his Boston Spaceships in his GbV. There is a certain amount of cohesion within some of the projects, given the changes in personnel, but in reality, the creativity and imagination of Robert Pollard is the base upon which every single one of these seemingly hundreds of albums is built.

Honey Locust Honky Tonk is a Robert Pollard solo album, in the same vein as previous great Pollard solo works like Kid Marine and Waved Out, and the good news is, it's of that quality, too. But like any really good Pollard project, the album features a number of curveballs. "He Requested Things," and "Circus Green Machine" are abstract, mostly acoustic numbers, but not entirely - the opening track features some nice rock guitar and an impassioned Pollard vocal:

"Suit Minus the Middle" and "Who Buries the Undertaker" are brief, rocking and upbeat, and the latter song will probably be my favorite song on the album at some point. But neither is as upbeat as the bouncy, poppy "She Hides in Black" - the rhythm track to that one wouldn't be out of place in Hall & Oates' catalog, but it also contains a heavy dose of prog, as does the song immediately following, "Her Eyes Play Tricks on the Camera". Like I said, curveballs... "Find a Word" is melodic and beautiful, with a nice acoustic guitar line, but also an undercurrent of menace. As with the six albums he released last year under various names, there are just about 17 potential favorite songs on this album, and plenty of killer one-two punches he's so fond of delivering... an example being the short, acoustic "Shielding Whatever Needs You" into the single "I Killed a Man Who Looks Like You", a pretty, country-inflected acoustic ballad:

That one sets up the last three tracks: the full-sounding singalong "Real Fun Is No One's Monopoly" and the well-sung ballad "It Disappears in the Least Likely Hands (We May Never Not Know),"  The longest track on the record, the majestic ballad "Airs" does a nice job of summing up the proceedings.

Apparently Honey Locust Honky Tonk is an album title that he's been waiting to use for 20 years. Can you imagine being productive, creative and fecund enough to keep a title that whimsical in reserve for 20 years? I recently saw an interview with a couple of rock musicians, one of whom described the difficulty he has in coming up with new ideas after having written over 200 songs. Robert Pollard writes 200 songs for breakfast. And the question remains: how can they all be so good?

It's out today (July 9) on GBV, Inc. and available via Rockathon.