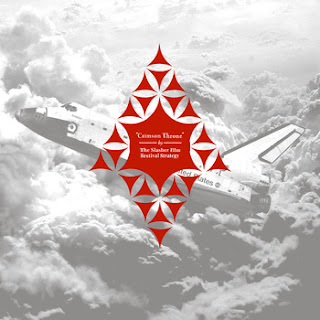 The Slasher Film Festival Strategy is the long running experimental project of South Carolinian Christopher Ashley, and reflects a variety of influences that have led him to produce dark ambient and drone compositions that hint at horror and science fiction. This project has two new releases in 2013: Crimson Throne (Foreign Sounds) and Wet Leather (Mirror Universe) harnessing the power and inspiration earlier releases, but pulling new energy in minimal electronics, experimental dance, coldwave, and horror/sci-fi soundtrack composition.

Crimson Throne is ostensibly the story of Space Shuttle Ambition, which was NASA's fourth operational spacecraft launching on February 3, 1987- the first manned space flight to Mars. Dubbed Operation Crimson Throne, the goal of the mission was to terraform Mars for potential colonization of future human inhabitants. A crew of seven successfully landed on the red planet on September 6, 1987 and all contact was lost a mere 18 days later. Whether intentional or not, Ashley's done a masterful job of capturing that big drum sound of so much music (especially soundtrack music) that was popular in the time of this event. I'm reminded of Eddie Murphy, Arnold Schwarzenegger and Steven Seagal soundtracks - music that is now seen as sort of manipulative and big and obvious, but - wait a minute, that was the point in the 80's! It's a compelling listen and... well, I won't spoil the ending for you. But it's kind of scary.

Here's a video for "Thermal Event" from Crimson Throne:

And here's the track "The Slasher" from Wet Leather:

Both of these are out now, available at the sites below. Ashley's site is a Tumblr which displays the dizzying array of musical projects he has had a hand in.