REVIEW: Doc Feldman and the LD50 - Sundowning at the Station 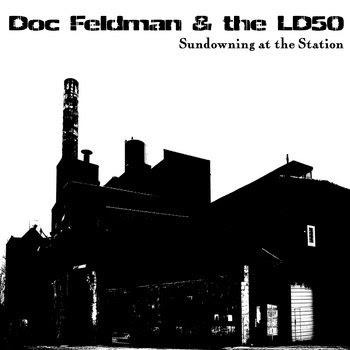 I think this is a good time for all of you to meet Doc Feldman.  You see, Doc and some of his musically inclined friends, calling themselves Doc Feldman and the LD50, have released a southern gothic/Americana/alt country masterpiece titled Sundowning at the Station.  It is gritty and dark with restrained and experimental instrumentation, including field recordings, and observations that cut like a knife or hit like a hammer.  In addition to Doc, the LD50 are James Jackson Toth, David Chapman and Jeremiah Floyd.  But after living with this album, it occurs to me that a contingent of ghosts and memories deserves to be credited as well, and they all should be proud to do so.

I'm sure you are familiar with albums that hook you in with a bouncy, happy first track?  Well, this isn't one of them.  Sundowning at the Station begins with "Ready" -- the musings of a murderer waiting on death row for a lethal injection.

The following "Texas Moan" dwells on a lost love, with the refrain "Shame on you Texas for pushing her away".

The vocalized pain becomes generalized to life itself on "Alive for Now".  The passionate "Let It Go" addresses coming to grips with transitions, and the regrets of the past.  "Can't Quit You" is a minimally adorned blues dirge.  After an instrumental interlude with gentle banjo picking and samples (the wonderfully named "Pinecone Drone"), Doc and company amp up the Southern Gothic with "Cold Tile Floor", referencing LD50 -- the toxicology term for a median lethal drug dose.  Then the electric guitars buzz in fine southern rock fashion on the cover of "Battle Hymn", which is the most up-tempo song on the album.

Restraint takes over again for "Only Light".  The band goes electric again for the country ballad, and one of my favorites of the album, "Bless This Mess".  The narrator begins with "damn this harsh reality" and then confesses to having expected too much from his dreams.  But I think that all that I need to write about this song is that the refrain prays  "Bless this mess of a heart, its come apart at the seams, the hollowed out dreams ...."  Indeed.

The album closes with "Weighted", featuring gentle picking and washed out vocals before swelling into feedback.  A more perfect ending to this album could not be devised.

The album was recorded in Lexington, Kentucky.  It is out now on This Is American Music.