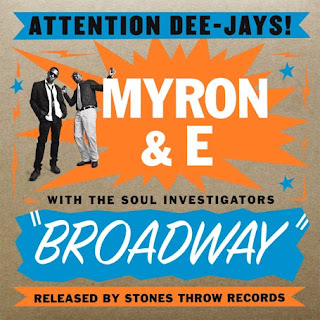 We first heard of Myron & E with the Soul Investigators a few months back when they released the lead track from their new album Broadway - the album is on  Stones Throw and was released last week (July 2). It is sweet, sweet soul music through and through - simultaneously old school, and young and fresh. Myron Glasper is from LA, Eric "E da Boss" Cooke from New Jersey, but they met in the Bay Area, while working with Blackalicious. Cooke was the tour DJ, Glasper sang backup. They have fairly extensive music histories individually, but together they really shine.

Previously featured on WYMA (post here), "If I Gave You My Love" was the first track to be released from the latest sessions. That one's got some great horns, a Motown drum beat and their contrasting vocal styles.

The opening track is a soul ballad, "Turn Back", and they have great voices for a soul ballad - kind of along the sweet style of The Stylistics or Delfonics. This is one of those projects that makes so much sense when you listen to it, it's amazing to think of the coincidences and circumstances that led them, and the backing band, The Soul Investigators, to come together. Here's a live video of them performing album track "On Broadway":

As great as the vocals are, the band supplies the perfect basis for them - guitar lines and horns ride on top of a super-tight rhythm section. The drum and bass are so good, you may find yourself focusing on the drums or bass alone, on songs like "Everyday Love". Then again, there are terrific soul touches everywhere - the strings and flute on "I Can't Let You Get Away", the old-school soul guitar intro on "Cold Game" and the psychedelic guitar and keyboards on "Back N Forth". Here's a live performance of "I Can't Let You Get Away".

This album is wonderful, and we have Stones Throw to thank for bringing it to us. And courtesy of Stones Throw, here's a non-album track, "Clap Sing":

Learn more, listen and buy at Stones Throw and Myron & E's Facebook page. And stay tuned for more information about the upcoming Stones Throw Soul Tour, featuring these guys and other label acts like The Stepkids, Dam-Funk and label founder Peanut Butter Wolf.