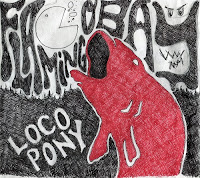 Calling their music "Northern swamp rock", Flamingo Bay has the stomp, swagger and best of all, the guitar noise to make good on the promise of a Canadian band who entitle an album Loco Pony. Yeah, I didn't get it at first... but on my second listen, as the first track "Serpentine" hit about the 0:50 mark, I got it... Crazy Horse. The turnarounds in the song, the guitar riffs, the crashing drums - all of it is impeccably done but simple and just dirty as hell. And the vocals contain more than a passing resemblance to the great Alejandro Escovedo. If that's not enough for you to check these guys out, you probably hate rock and roll. Which is fine, but I just don't know what you are doing here. Here's "Serpentine":

Here's "Bleed" - which contains all the guitar swagger, but is more uptempo with a lot of punk energy, and some guitar feedback:

The band consists of Dillon Henningson, Kris Gies and Vince Rankin - a hard-working power trio with a ton of promise. This single is free for now on Bandcamp (just click through the links above), the album's due out in September - if you like guitar rock, don't waste any more time. Grab this gift from north of the border.