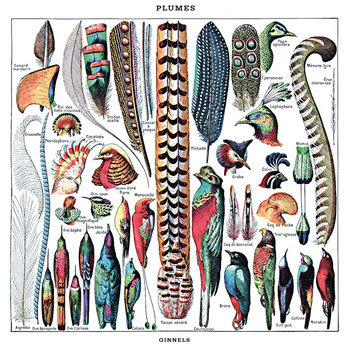 Among our goals at WYMA is bringing to your attention good music that may not receive much publicity or radio play.  Of course, to do that we have to find the artists.  And one way to find under-the-radar artists is to pay attention to recommendations of other artists.  I discovered Irish artist Ginnels, the performance name chosen by Dublin musician Mark Chester, via a recommendation of one of his songs from Seattle band Zebra Hunt (whose Beaches EP is a solid-gold nugget (review here). And I am very glad that I followed the recommendation, as Ginnels' Plumes is a very impressive collection of jangle pop that I suspect will be on my year-end list.

Mark Chester also plays in Grand Pocket Orchestra and No Monster Club.  Ginnels is his solo project, although he enlists the assistance of a few musician friends for live performances.  The influences suggested by the music are The Byrds, The Bats, The Feelies, Robyn Hitchcock and Guided by Voices.  The arrangements are dominated by acoustic or jangly electric guitars, and the melodies are eminently catchy and upbeat.  The material on Plumes is collected from three prior releases and some tracks previously only available online.  But since most of you are likely unfamiliar with Mr. Chester's work, I suspect you will find the music as fresh and exciting as I do.

The most difficult aspect of covering Plumes is choosing the songs to showcase the album.  The quality is sufficiently high and consistent that I could have chosen any four and felt that I'd done the material justice.  However, I wouldn't want you to miss out on the delights of "Stink It Out", "Bateau", "Heathwaite Wood", or "The Childish Lane Story", so if you like the clips below, go to the Bandcamp page and stream the album.  It is likely to be among best 34 minutes of your day.


Plumes is available now via the young Spanish label Tenorio Cotobade.  The best way to find it is hit the Bandcamp link below.  A purchase gains you a vinyl LP and a digital download.