REVIEW: Cornell Campbell Meets Soothsayers - Nothing Can Stop Us 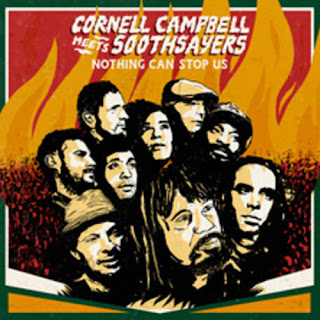 Strut Records is on a bit of a winning streak. In the last few months, we've been sent two tremendous reissue projects, but this time they have a brand new recording by the original Gorgon, Cornell Campbell, one of the greatest vocalists in the world, paired with one of the hottest Afro and reggae soul outfits in Europe, Soothsayers, led by Robin Hopcraft and Idris Rahman. The pairing is the result of a chance meeting between Bunny Lee and Soothsayers' Robin Hopcraft in Kingston, Jamaica early in 2011. Cornell Campbell Meets Soothsayers is the name of the combined entity, and the album is Nothing Can Stop Us.

After Campbell and Hopcraft met, they set up a session at Bunny Lee’s studio in West Kingston, at which was produced “I’ll Never Leave,” a beautiful track that's an homage to Campbell’s island home country in Parish of St Elizabeth. I'd say this is my favorite track on the album, but it's hard to pick a single favorite as the overall quality is excellent. Here's "With You My Heart Belongs" - it's got a nice, smooth dub track and an even smoother Campbell vocal:

Here they are discussing their meeting, and the project:

In addition to some truly great reggae vocals and dub rhythms, the album contains some fairly creative touches, from a sort of afro-pop approach on the title track (as well as a few others) to some sizzling guitar on several tracks and terrific horns throughout. As well, it's just about a perfect balance between uptempo reggae numbers and sweet ballads that are perfect for Campbell's voice, including the outstanding lovers' rock track "There's A Fire".

For anyone who is familiar with Campbell from his older work and may be concerned as to whether he still sounds great, have no fear. His voice is in excellent form and he's found some truly kindred spirits in Soothsayers, who are known for their work with Johnny Clarke, Maxi Jazz (Faithless), Keziah Jones and more, as well as their work on the London leg of the ‘Fela!’ musical during 2011.

Here's their dub version of the album track "Ode to Joy (Babylon Can't Control I)", titled "Babylon Can't Dub I":

The album is part of the Inspiration Information series on Strut Records, and is out this week (July 9).