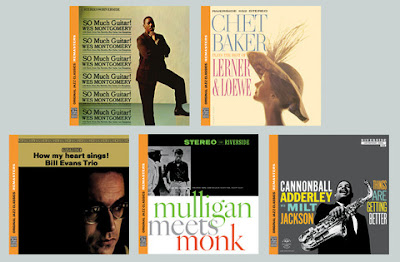 This is an amazing and truly beautiful collection of musical treasures from the folks at Concord Records. They're celebrating the 60th anniversary of Riverside Records by releasing newly mastered editions of five great jazz records: Thelonious Monk & Gerry Mulligan: Mulligan Meets Monk, Bill Evans Trio: How My Heart Sings!, Wes Montgomery: So Much Guitar!, Cannonball Adderley & Milt Jackson: Things Are Getting Better, and Chet Baker Plays the Best of Lerner and Loewe

Uniformly wonderful, yet varied in approach, these discs cover the span of time from 1957 to 1962. Since we make it clear that, at WYMA, we are not critics but "appreciators" of music, I will dispense with any effort to evaluate these records individually, except to say that they are all terrific and the one I thought I would like the best (Evans) is in fact wonderful, but the one I wasn't so sure I would like (Baker) might be the best of the bunch. But that's the problem with these Riverside records, as anyone who collects jazz will know. With no bad records, ranking them becomes a bit futile. To put it simply: if you like 50's and 60's jazz, you will want all of these.

Here is more information on each record, directly from Concord:

Riverside was launched in 1953 in New York on a shoestring budget by traditional-jazz enthusiasts Bill Grauer and Orrin Keepnews as a platform to reissue jazz and blues recordings from the 1920s by King Oliver, Jelly Roll Morton, Ma Rainey, Blind Lemon Jefferson, and others. Over the next decade, the label evolved into one of the premier purveyors of modern jazz. With Keepnews producing the sessions (and often writing the liner notes), Riverside brought jazz giants like Thelonious Monk, Bill Evans, Cannonball Adderley, and Wes Montgomery to the forefront of American music. Riverside folded in 1964, a year after Grauer’s death. The catalog was acquired by Fantasy in 1972, and Fantasy was in turn acquired by Concord Music Group in late 2004.

All five Riverside titles in the current round of reissues were originally produced by Keepnews and include his original liner notes. All reflect the ambitious depth and scope of influential jazz captured in the Riverside catalog over the relatively short span of 11 years.

Thelonious Monk & Gerry Mulligan: Mulligan Meets Monk
Recorded in mid August 1957, Mulligan Meets Monk is a summit of two artists from two very different and distinct worlds — Monk representing what was then known as East Coast jazz, and Mulligan deeply rooted in a West Coast sound. Rounding out the quartet are bassist Wilbur Ware and drummer Shadow Wilson. Even with the two frontmen’s disparate styles, the unlikely pairing resulted in an engaging and enduring recording, according to Neil Tesser’s new liner notes.

“Despite their radically different personalities, and their almost antipodal approach to improvising, Monk and Mulligan found common ground in composition,” says Tesser. “Not in the songs themselves — no one would ever mistake one of Monk’s for one of Mulligan’s — but in their devotion to the craft, and their admiration for the balanced, well-turned tune. That devotion manifested itself quite differently in their individual musics, but it provided the foundation for their unimagined friendship . . . and allowed them to join in this unexpectedly successful venture.”

Bill Evans Trio: How My Heart Sings!
Recorded in New York on three separate days in May and June 1962, How My Heart Sings! features Bill Evans accompanied by bassist Chuck Israels (replacing Scott Lofaro, who had died in an automobile accident less than a year earlier) and drummer Paul Motian. The album is actually the second of two to emerge from the 1962 sessions; the first was Moonbeams, a collection of ballads. How My Heart Sings! is, by design, a bit more lively and energetic.

“The selections represented here are primarily of a more ‘moving’ kind,” says Doug Ramsey in his new liner notes to the reissue, “though there is in the trio’s approach to all material a desire to present a singing sound. Hence, the title of the album, despite its intended program of faster swinging vehicles.”

How My Heart Sings! includes three bonus tracks: an alternate take of “In Your Own Sweet Way,” and previously unreleased renditions of “34 Skidoo” and “Ev’rything I Love.”

Wes Montgomery: So Much Guitar!
So Much Guitar! was recorded in August 1961, with Wes Montgomery fronting a stellar lineup that includes Hank Jones on piano, Ron Carter on bass, Lex Humphries on drums and Ray Baretto on congas. The album was a turning point, not only for Wes but for bassist Ron Carter as well, says Marc Myers, author of the reissue’s new liner notes.

“While Montgomery’s previous release on Riverside in 1960, The Incredible Jazz Guitar of Wes Montgomery, put the guitarist in play with critics, So Much Guitar! caught the ear of poll-voting jazz fans and established him as a soulful force,” says Myers. “The album also marked Carter’s first opportunity to show his stuff on the fly — transforming the formally trained 24-year-old into a first-call session player. Today he is one of the most prolific recording artists in jazz history.”

The bonus tracks here essentially make up an entire second album, capturing eight songs recorded earlier in 1961 at the Cellar, a club in Vancouver, British Columbia. This Canadian set — originally issued on Fantasy as The Montgomery Brothers in Canada, includes Buddy Montgomery on vibes, Monk Montgomery on bass, and Paul Humphrey on drums

While Keepnews’s original liner notes referred to the recording as “fundamentally a blowing date in the best sense of that much abused term,” the set is clearly much more than that, according to Willard Jenkins’s new notes. “The album’s groove stems primarily from the successful partnership formed by the blues firm of Adderley and Jackson,” says Jenkins, “each of whom were hall of fame representatives of the essence of the groove factor during their time as the respective histories of each have borne out.”

The reissue of Things Are Getting Better includes two bonus tracks not found on the original LP: alternate takes of Buddy Johnson’s “Serves Me Right” and Lawlor and Blake’s “Sidewalks of New York” (the latter arranged by Adderley).

The album “is easily heard as a sequel to the popular Chet (also on Riverside) album of standards released earlier that same great-jazz year of 1959,” says James Rozzi in his liner notes to the reissue. “The mix of personnel throughout the set provides the recording “with a similar timbre while adding uptempo fare to the previously released, slow and relaxed ballad set of Chet.”

The music, the packaging and the liner notes (both the originals by Keepnews and the new notes by a variety of writers) are all very good. The amalgamation of talent is nearly unbelievable - Thelonious Monk with Gerry Mulligan, Cannonball Adderly with Milt Jackson, Wynton Kelly, Percy Heath and Art Blakey - really, dream combinations. Herbie Mann's flute work on the Baker disc is just tremendous. But these are just highlights, as there is not a weak moment on any of these. The links in the record titles above will take you to the Concord site where you can learn more, follow their links to Amazon or iTunes to listen to samples or order the records.
Posted by John Hyland at 7/26/2013