We started seeing tracks from Tom Chasteen and Tippa Lee (operating as Dub Club) several months ago, as we shared the two dub version albums, Signs And Wonders in Dub (WYMA post here) and Bubble Dub (WYMA post here) with you. Well, the mother lode is finally here: Foundation Come Again is a wonderful collection of new tracks from some of the best Jamaican sound system vocalists that Chasteen and Lee have worked with. Chasteen started bringing these artists to LA to perform at his club, and the idea of creating an album featuring their still-strong vocals over the super-bottom-heavy tracks of the Dub Club All-Stars was born. Since not all were available to travel to LA, Lee went to Jamaica and captured vocals from many of them at Mixing Lab in Jamaica. There are 20 tracks on the album, each with a different vocalist or combination of them - including such giants of reggae as Prince Jazzbo, who contributes the foreboding "Black Shadow", and Big Youth, who sounds nearly as strong as ever on "Healing of the Nation" - just to name two.

Artists like Wales, who has a direct line back to U Roy's sound system, bring a level of credibility to this record that is almost unbelievable. However, while authenticity and gravitas are good, the sound is the thing. And this all sounds tremendous.

Sadly, three of the vocalists on here: Ranking Trevor, King Stitt, and Errol Scorcher all passed on after recording their tracks for this album. But they are captured in fine style. Perhaps the best track on the album is Trevor's opener, "Paper and Pen". Note the dedication on the back cover: 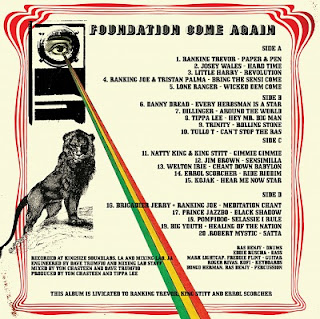 If you're a fan of 70's-80's Jamaican dancehall and dub music, you will be amazed at the quality and quantity of music on Foundation Come Again. This album works as a time capsule or historical document - truly, just to have one track by each of these Jamaican legends, it would be worth much more than the cost of the album. But it's also (and perhaps more importantly) a great reggae album - a test for your sound system's bottom end and an invitation to the neighbors to come over for a good time, if you live too far from Los Angeles to catch one of the weekly shows at the Dub Club.

Foundation Come Again was released last week (July 16) on Stones Throw. Buy the album, individual tracks, or learn more at Stones Throw. Learn about the shows on Dub Club's Facebook page - both below.

The recent Dub Club records have been some of my favorite reggae records in recent years.