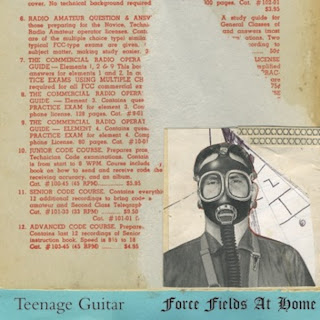 A friend of mine is fond of expressing the sentiment that this is a very blessed time for fans of goofy, literate, well-crafted guitar rock... because we are fortunate indeed to share the planet with Robert Pollard and a number of record labels who are willing to let him release a seemingly unlimited number of records. Well, here we go again: Teenage Guitar is the name of this project, and the album is Force Fields At Home.

Teenage Guitar is mainly Robert Pollard, with some help from Greg Demos and Joe Patterson on drums and bass, respectively. All else is Pollard, and it's one of his more peripatetic releases, with a delightful variety of tempos and instrumentation.

The opening track, "Court of Lions", is a fairly conventional Pollard guitar rock song with a strong vocal. The longest song "Come See The Supermoon" is one of the weirdest, and of course this album contains some of the ultra-short gems that Pollard and GbV fans are accustomed to expecting: "Strangers For A Better Society" and "Peter Pan Can" get to the point quickly, the latter with a double-tracked Pollard British-accented vocal, an insistent tension/release guitar line and just a bit of chaos. Taking the trend to what might be its ultimate conclusion, "Bars of Meaningless Matilda" is just a perfect :34 of guitar pop with no frills at all. This leads into a pretty, acoustic number "Harvest Whale" - with the pleasing sounds of acoustic guitars and vocals offset by what sounds like a struck spring or one of those giant plastic microphones.

In short, the album covers the four P's and is a delightful mixture of oddities and delights - and being released on the same day as the previously-covered Honey Locust Honky Tonk, it merely confirms my friend's observation: these are special times indeed.