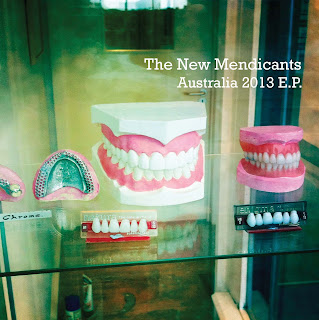 The New Mendicants are Joe Pernice (Scud Mountain Boys/Pernice Brothers) and Norman Blake (Teenage Fanclub/BMX Bandits), so one thing of which every listener can be assured is that the pop craftsmanship will be top shelf.  The fruits of their recent collaboration is the Australia 2013 EP, a largely acoustic affair that showcases the ability of Pernice and Blake as interpreters, as well as the quality of the underlying material.

The EP begins with a cover of the Andrew Farriss-penned INXS' song "This Time".  It starts out the proceedings in a glorious power pop groove.

"Follow You Down" and "High On The Skyline", the second and third tracks, are a gentle acoustic tunes written by Pernice and Blake.  Track 4 is a memorable cover of the Blake-penned "I Don't Want Control Of You", which was a hit for Teenage Fanclub (the bongos are a nice touch).  Track five is Pernice's "Amazing Glow".  The album closes with the jointly written  gem "Sarasota".

A pop fan will not regret the 16 minutes spent with this album, although I suspect you will fall in love with many, or all, the tunes and spend a lot more time with the EP.  And for additional good news, I note that The New Mendicants are preparing a full length album for release in 2014.

Australia 2013 EP is out now on One Little Indian.  Blake and Pernice were joined by Mike Belisky of The Sadies on drums.