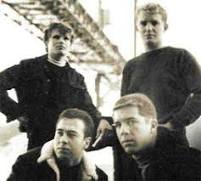 In the mid-60's when what would later become known as Creedence Clearwater Revival were starting out, they were known as The Golliwogs and had a much more basic garage rock sound. Early on, big brother Tom Fogerty was on vocals, but soon little brother John took over and they sounded like this:


Not long after, John assumed songwriting and producing, refined their sound, they changed their name and took off. But they started as a garage band like so many found in every corner of America in 1966.
Posted by Jim Desmond at 7/12/2013