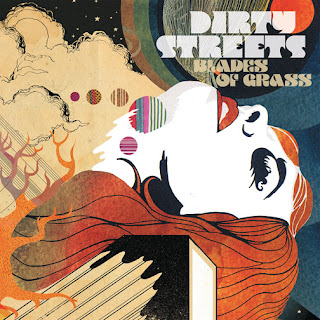 Formed by Thomas Storz (bass, percussion), Justin Toland (vocals, guitar, percussion) and Andrew Denham (drums, percussion) the heavy blues-rock power trio Dirty Streets now calls Memphis home (they're originally from Mississippi). Ardent Studio in Memphis is where they recorded their new album Blades Of Grass. They share a label with WYMA favorites Lee Bains III & The Glory Fires, and have opened for them. That was certainly enough to earn a listen, and from there, the deep groove, guitars and pianos are plenty of incentive to stick around for the whole album.

Here's the album opener, "Stay Thirsty", from which you'll absolutely get a Jeff Beck Group vibe - check out the guitar/piano interplay about :45 into the track... it reminds me of an old favorite, "Goin' Down":

The free download of that one may still be available.

Here's the title track - in addition to the way the rhythm section boogies, check out those deep, heavy guitar tones and the interplay with the vocals, which call to mind both psychedelic rock and blues at the same time:

The band already has two independent releases under their belt, including an album with renowned Memphis producer Doug Easley (Grifters, GbV, Jon Spencer Blues Explosion, Reigning Sound - just to name a few). They also recently toured with labelmates Radio Moscow. If you like heavy blues rock, and some of the other Alive/Naturalsound bands we've featured in the past (Radio Moscow, Lee Bains, John the Conqueror), this will please you. You can learn more and buy at Alive/Naturalsound, or get the limited edition color vinyl at Bomp! Records.