His Name is Codeine - The Only Truth is Music 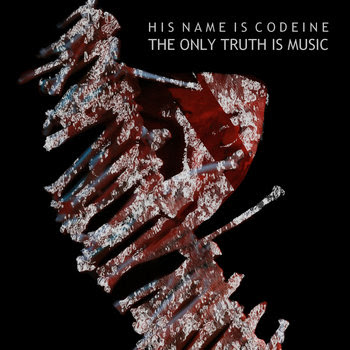 The music of Elgin, Scotland's His Name Is Codeine is built around pop melodies swathed in walls of guitars, keys and percussion.  I suppose that if one were inclined to genre tag the music shoegaze, psychedelic and noise pop all would lay a claim.  But those designations cover a lot of territory and ignores the uniqueness of quality music.  After all, Ride and The Jesus and Mary Chain both are called shoegaze, but they really are not that much alike.  And examining The Only Truth Is Music, the debut LP from His Name Is Codeine, one can identify the distinctive elements that the band combines.

While the pace and atmosphere may evoke track downer rock, there is a current of vibrancy coursing through many of the tracks.  For example, "Shoot to Kill" is likely to have the crowd stamping and dancing as the music rumbles on.

"Not A Number" is a menacing, droning track featuring another distinctive feature of this band -- two fine female vocalists.

The Only Truth Is Music has been available since the end of May.  If you are interested, check the Bandcamp link below.  You also can stream the entire album on Bandcamp.

A third distinctive element is the band's versatility.  They can sound sleazy or reach for the heavens.  They can drone, stomp, shred or jangle.  "Replica Gun", for example, has a near country feel --