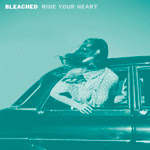 Had enough of the lo-fi punk-influenced sunny California reverb-drenched guitar pop? No, me neither. The latest entrants are Jennifer and Jessie Clavin -- a sister pair known as Bleached, and their album is Ride Your Heart.

Growing up they taught themselves to play -  "Me and Jen were punk kids who weren't taught how to play instruments," says Jessie. We taught ourselves how to play, out in the garage." And after a period of time sneaking into LA punk clubs, they formed an all-girl band, Mika Miko, which eventually broke up. Jen and Jessie went their separate ways for a while, but eventually were drawn back together. The rapport they have, and the joy they feel in playing together, are evident in the music - twelve tracks of some of the best pop/punk you will hear all year.

I really like the vocal harmonies - they have a way of rushing into and out of them that keeps the momentum of the song going, but still adds some depth to it.

Ride Your Heart is out on Dead Oceans, released earlier in April.

And they're touring in Europe - dates below: