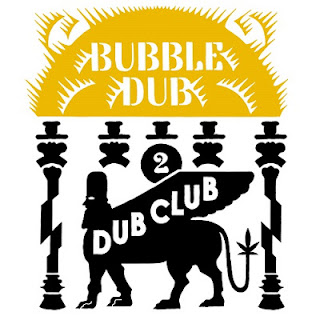 Our friends at Stones Throw and the Dub Club have done it again. We recently featured the excellent Vol. 1, Signs And Wonders in Dub from LA's Dub Club (WYMA post here). It was the first of three planned summer 2013 releases featuring Tom Chasteen, Tippa Lee and a host of Jamaica's finest singers, musicians and toasters. This week, the followup dub album Bubble Dub was released - a limited edition on vinyl and downloads.

These are dub versions of the tracks from the forthcoming Foundation Come Again (due out in July on Stones Throw), and they are plenty hot and heavy on their own. Really, this is an unbelievable treasure. It's true dub - Chasteen and Lee really know what they're doing and show a real love for this type of music. Opening track "Gimmie Dub" is a traditional-sounding dub version, and features the super-heavy bass with reverb-laden keyboards and DJ toasting. Several other cuts, including "Bring the Dub Again", "Hard Time Dub" and "Ain't Too Proud To Dub" (yes, it's a version of a cover of that one), feature some really tasty guitar licks.