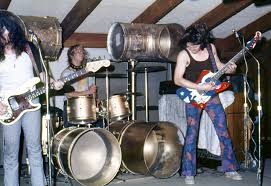 Bob Seger turned 68 this week. Which got my thinking about me hometown hero.

Before Bob Seger reached mega-stardom as a Midwestern rocker who had a great way with what  became classic mid-tempo songs and ballads ("Night Moves", "Turn the Page", "Against The Wind"), he paid a lot of dues playing the club circuit around Detroit and Ann Arbor. And like so many bands of the era, he started as a garage rocker, loose and rough around the edges.

Many of you probably know "Ramblin' Gamblin' Man", a great song to be sure, but my early Seger favorites are his anti-war rant "2+2=?" and this Nugget from 1967, "Heavy Music":

Bob Seger continues to tour and fill arenas, and from all reports, put on a terrific show.
Posted by Jim Desmond at 5/10/2013