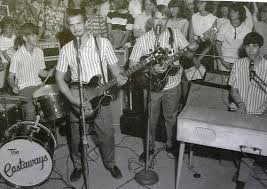 "Liar, Liar" is another of those highly memorable '60's garage rock songs. Released in 1965, "Liar, Liar" was the only hit from The Castaways, from Minnesota.

While it's falsetto chorus is unforgettable, I love the organ sound here and the overall pace and feel of the song - the drum breaks, the freak out vocal bridge in the middle, the guitar sounds. And this video!:

"Liar, Liar" was covered by both Blondie and The Pretenders.