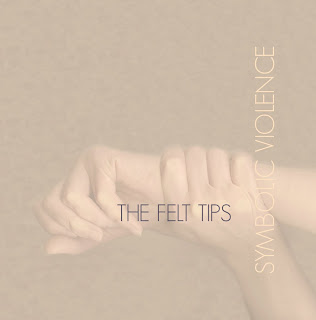 Like the drawing implement referenced in their name, Glasgow's The Felt Tips create vividly colored social commentary, highlighted by lead vocalist Andrew Paterson's evident Scots accent and Miguel Navarro's delightful guitar.  Their songs address melancholy, conflict and other manner of mature-rated subjects.  But at the hands of The Felt Tips it all sounds great and, at least musically, it is perfect for a sunny spring day -- proving that social commentary doesn't have to sound grim.  The well-listened indie pop fan will hear elements of Belle & Sebastian, The Housemartins, Camera Obscura and The Smiths.  But what I think sets The Felt Tips apart is their ability to balance their elements in creating a package of nearly universal appeal.  The melodies, fine musicianship, and sincere performances all make Symbolic Violence one of the indie pop finds of the year.

An example of The Felt Tips' juxtaposition of wry observation and pop melody can be found in "Iron Lady", the opening track.  It tells a story set on a New Year's Eve, with the chorus consisting of Kate Moss' famous quip that 'nothing tastes as good as skinny feels'.

The band was formed in 2005 in Glasgow when vocalist and guitarist Andrew Paterson was joined by Miguel Navarro, a guitarist from Spain.  Neil Masson on bass and Kevin Carroll on drums completed the quartet.  Their first album was released in 2010.

Life is complicated.  "In The Heat of the Summer" Paterson first sings that he's never felt so alive, but eventually concludes that he has never felt so alone.  And in "Lyrics by Lennon" the narrator takes aim at icons John and Paul --

The album, and the musical portion of our post, ends with this song centered on sibling rivalry -- 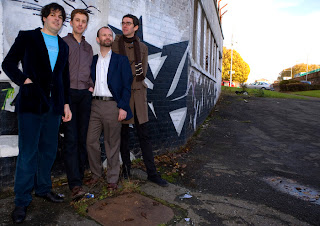 Symbolic Violence was released on Firestation Records on May 6.  It is available on vinyl, CD and via digital download.

It's nice to read such a thoughtful review. I can tell you've given the album time, though I've always thought their pop sensibilities were immediate. I must point our that the band formed and are based in Glasgow. :-)