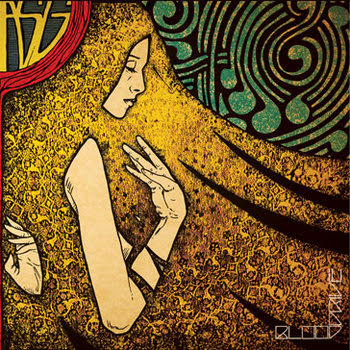 ASG is a North Carolina metal/heavy rock band, and has just released its fourth album and Relapse debut Blood Drive. On first listen, I'm knocked out by the heavy groove they ride in... but what makes me keep coming back is singer/guitarist Jason Shi’s voice. Unlike so many metal bands whose riffs and groove make me want to like them, but whose Cookie Monster vocals just don't appeal to me, ASG has risen to the all-around excellence of Relapse label-mates like Baroness and Mastodon, or other WYMA favorites Torche.

Here's "Avalanche" - the opening riff, the building guitar sounds, it's all in service of great songcraft. Shi's voice is terrific - reminiscent of Layne Staley - and he has a tremendous presence:

It gets heavier - some of these songs are amazing riff-fests, where the guitars and the vocal lines resemble a harder-edged, heavier Judas Priest, and Shi shows he's got the chops to scream along with (or on top of) even the heaviest material. Here's "Castlestorm":

And those guitars, and the rhythm section, would be enough to make ASG worth a second, and third listen. Heavy, but very melodic, some of the guitar work is so well-realized I would almost call it delicate, if it wasn't absolutely skull-pounding. But it's certainly beautiful - and some of the songs, bluesy ballads like "Blues For Bama", are enchanting. It's out tomorrow (May 28) on Relapse - you can learn more at the website, and order a vinyl edition which will contain a bonus track "Mourning of the Earth".

Sadly, for me, what could have been a landmark album has been robbed of that chance by the production. Don't get me wrong, I like the record, but I can hear what it could have sounded like, and that's just a shame. Matt Hyde should hide his head in the sand for turning a masterpiece into something you have to struggle to listen to. The songs are there, the production and mixing, doesnt cut it.

Wayne, we are always grateful to readers for leaving their thoughts - it means a lot that people care enough to do that. Obviously, I disagree and was pretty happy with the record that ASG made, but as always with music, different people can hear (or be looking for) completely different things. Please feel free to come back, share your thoughts anytime.

Well folks, I have never in my life been more wrong about an album then i was with Blood Drive. Not only what I thought was bad production and other issues, completely wrong but it was shortsighted. ASG's Blood Drive somewhere around the 5th listen not only started to get into my blood and mutate into a blissful rock album, but it became far more then I ever thought it could be. I want to totally slag on my earlier review, it is not only wrong it is horribly wrong. Blood Drive, is a record for the ages, let this one soak in a bit folks, it has gone from not so good to my album of the year. I should have known something more was going on then met the eye. You need this record, and get it on vinyl if you can, at 45rpm's it just begins to become a life force of it's own. One for the ages!!!