Friday Nuggets - "Open Up Your Door", Richard and the Young Lions 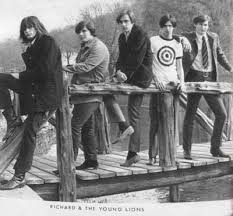 This is one of those beloved songs of my youth that has stayed with me, transporting me right back to being that 10 year old kid in Detroit discovering rock'n'roll, listening to the hits on the mega-watt Canadian radio station CKLW.

Richard and the Young Lions, from New Jersey, like many garage rock hitmakers from the '60's, were a classic one hit wonder band. "Open Up Your Door" was a regional chart-topper in New Jersey, Detroit, Cleveland and a few other markets, and is a big favorite of Little Steven's. I would wager that  young Bruce Springsteen never changed the station when this song came on the radio.

This video further takes me back to my adolescence as it comes from the Windsor/Detroit TV show Swingin' Time, which aired in the late afternoon and was hosted by legendary local DJ Robin Seymour ("The Bird"). I probably saw this when it aired in 1966.

"Open Up Your Door":

Hey Jim, thought you might get a kick out of this new animation for Moritat's "I Forgot to Kiss Her"