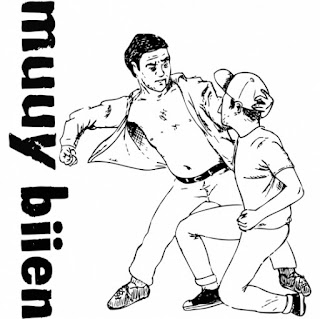 HHBTM Records in Athens, GA has been cranking out some really good music over the last year or so - but nothing quite like this. Muuy Biien hearkens back to the glory days of the punk movement, when bands like Black Flag, The Dead Kennedys and Fear were blowing peoples' minds and speakers. This Is What Your Mind Imagines is the debut album from Muuy Biien. It features plenty of this ferocious punk, but also three ambient interludes that, oddly, don't sound out of place at all. To me, that's the mark of a really good album.

It's a short album - an intro that is instrumental and consists of about 45 seconds of feedback and spaceship sounds made with an electric guitar, melding into another 45 of great heavy lead guitar over a sludgy rhythm section. Then, of course, it jumps right into the first song, "Another Degradation" - an expression of outrage you can feel. Then "Uncle Tony" - which sounds pretty much like the fight that's pictured on the album cover. Or this bunch of guys making an unholy racket in the basement.

Here's "Something Rotten" - all wall of guitars, drums and vocals that are pretty much spit out:

Here's "Sister" - kind of a d boon bass line, and super-quick (less than a minute):

The longest tracks are "Fallin' Out" - which features a heavy metal guitar - and the third of the ambient instrumental interludes, "Emesis III". They're all called "Emesis". They're good pieces, and do a decent job of breaking up the hard stuff. If you like classic punk, this is definitely for you. The album came out last week (May 14) in the US and next week (May 28) in the UK. They apparently already have another album in the works, scheduled later this year, and I'm looking forward to it.