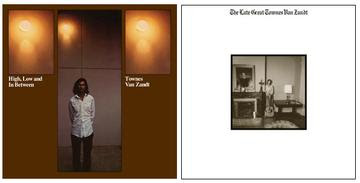 Great news for fans of country rock and great songwriting, Omnivore is releasing impeccably remastered versions of Townes Van Zandt's early 70's masterpieces. These albums are full of songs that are shining examples of Van Zandt's mastery of phrasing and timing, including "Pancho and Lefty" - surely one of the most-covered songs in history:

Here, from the Omnivore press release:

"High, Low and In Between, Townes Van Zandt’s fifth album, originally released by Poppy Records in the fall of 1971, was an album that saw Townes becoming the songwriter revered today. Full of original material, including “You Are Not Needed Now,” “Blue Ridge Mountains,” and “To Live Is To Fly,” it opened eyes and ears to his abilities. His backing band included folks like Larry Carlton, who would play on Joni Mitchell’s Court & Spark, who accompanied Steely Dan on The Royal Scam... [it] is, in the end, a classic Townes Van Zandt album...
The Late Great Townes Van Zandt, his sixth effort, hit the shelves in 1972. The album built on High, Low and In Between, adding texture in both song and production. It’s probably best known for “Pancho & Lefty” — the song Emmylou Harris covered for 1977’s Luxury Liner and which Willie Nelson & Waylon Jennings would take to the top of the charts in 1983. Full of originals, as well as covers like Hank Williams’ “Honky Tonkin’,” the release was Van Zandt’s perfect storm, with every element in place."

I don't have much to add, except my agreement. These records are absolutely breathtaking and, although a lot of their beauty is in the space between words and notes, they are rich and full, and absolutely reward repeated listening... even after all these years.These remasters will be available on CD, in a digipak with liner notes from award-winning scribe Colin Escott, as well as on 180-gram vinyl, with the first 1000 pressed on orange and clear colored vinyl respectively. (Future pressings will be on standard weight, black vinyl.)

did they leave out the mariachi horns on pancho and lefty?

Is it just me? I love the horns on Pancho and Lefty.

Horns are on the remaster. And they sound great. Thanks for reading!