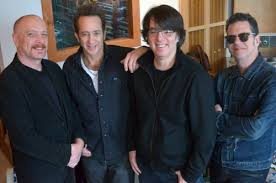 I am a sucker for the great American bar band. Guitars turned up loud, rock solid drummer, hints of R&B and '60's garage bands, maybe a country or folk-rock song or two, no frills, a little swagger but not taking themselves too seriously. By definition these bands are generally unheralded, unless they happen to be Bruce Springsteen or Tom Petty's band.

And one of the all-time great bar bands, the Del-Lords, from New York City, has released its first new LP since 1990. Elvis Club does the Del-Lords legacy proud and comes out just in time for your backyard summer BBQ parties. Just add beer.

You wait 23 years to release a record, stands to reason you won't want to fool around ouf of the box, and the first track here "When the Drugs Kicked In" is a sure fire winner, with its big pop hooks and good time feel.

Other standout tracks here are tough Americana of "Flying", the jangly "Everyday" (co-written with the legendary Dion, yes that Dion!), the blistering record closing cover of (speaking of great bar bands) Neil Young and Crazy Horse's "Southern Pacific", a beautiful ballad "Letter" (with this great line: "The devil says true love's a lie, but the devil's a liar"), and the rolling down the highway blues-rocking "Chicks, Man":

Appreciate the fiery and tasty guitar playing on "Chicks, Man"? Well, you'll find plenty to like here as Eric "Roscoe" Ambel, who started his career as a member of Joan Jett's Blackhearts, has spent the last 20 years honing his considerable guitar skills as a hired gun for the likes of Steve Earle. Ambel is also a top producer and gets just the right sound for his own outfit here on Elvis Club.

The original lineup of the Del-Lords is nearly intact. Scott Kempner is the lead singer and main songwriter and is in fine form throughout. Drummer Frank Funero you may know from Cracker and Camper van Beethoven, and is so solid, a great rock drummer. The band's original bassist is now a practicing attorney (hey it happens, even to bar bands) but is capably replaced by Michael DuClos ("the only man to have played with both Pete Townshend and Buddy Hackett" dryly notes the band's bio).

If you like real rock'n'roll, and value the heart and craft of it, Elvis Club is the record for you.