REVIEW: The Heligoats - Back to the Ache 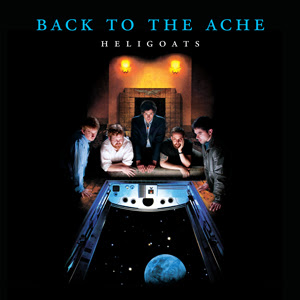 The Heligoats is Chris Otepka's band, but until now has been pretty much a solo project with Otepka doing most of the work and a variety of guests filling supporting roles. On his latest record Back to the Ache, he's settled in with a band. The result is a strong album with a lot of variety in sound and tempo - an album that, in a good way, is all over the place.


Otepka describes the lyrical theme (which also informs the tone of the album, I think): “The word ache appears throughout the album, it was a theme that emerged only after the record was done.  The recording process actually happened in spurts over 5 (Feb - July 2012) months and in-between I was touring around the country, North and South America.  This record was fun to write at home, on the road and in the studio.  I was never anywhere for more than a few days at a time. So, the ache became the familiar place."

Otepka spent time in Clem Snide with Eef Barzelay - and they are sort of kindred spirits. Just for fun, here's a clip of the two of them covering Bryan Adams:

If you enjoyed Clem Snide's literate, carefully-phrased folk rock, you will enjoy The Heligoats for sure. But this album also veers into rock territory, displaying in several places a real punk energy. After all, Otepka says the reason he's settled the Heligoats into a quartet is because of his re-connecting with drummer Nate Lanthrum, with whom he played in Midwest pop/punk band Troubled Hubble, which dissolved in 2005.  Otepka says “when we got together for the first time in over seven years, we picked up right where we left off.”  Also on board was Steve Mitchell (guitars/keys), Dave James (bass), Nick Lombardo (keys) and even some added percussion from Erik Rassmussen (who recorded and mixed part of the album).

And here's "Tofutti"... this track and the opener, "Good Morning" remind me the most of Clem Snide:

The album was released in March on Greyday Records - and I am happy to add to the chorus of praise that's emerged since the release. You can learn more, and buy it at Greyday's website: