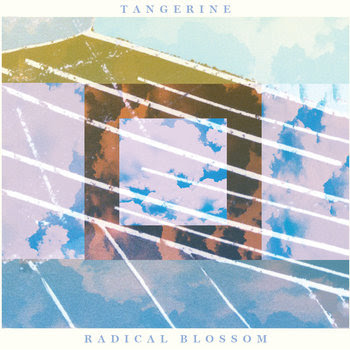 Call me a softie, but I like music that provides a soundtrack to fall in love and be in love.  As long as I'm making a wish list, it should have great female lead vocals.  And if some tunes display a sense of humor such as, for example, a song about a leaking nuclear waste tank at the Hanford site in Washington, all the better.  Special bonus points are awarded if it is a Seattle-area band.  But does such music even exist?  Why yes -- yes it does.  We present to you the Radical Blossom EP from Seattle four-piece Tangerine.  Consisting of sisters Miro (drums/vocals) and Marika Justad (vocals/guitar/keys), and non-sisters Ryan (bass/vocals) and Toby (guitar/vocals), the band provides guitar pop with a clear debt to '60s music.  But the guitars and fuzz and crunch in very satisfying fashion and there is a cleverness and modern sensibility to the songs that brings it all up do date.

Radical Blossom is comprised of four-tracks.  Lead song "Feel This Way" should be on everyone's summer jam.  Marika's sweet vocals state her case for some lucky guy to feel about her as she feels about him.  But it is done in a breezy manner that allows the upbeat arrangement to shine beyond the plaintive theme.  You can stream it below, or hear it while watching the video of summer in Seattle.

"Hanford Riviera" is the aforementioned track regarding the leaking waste tank, but in true indie pop fashion the arrangement is so poppy that you won't recognize the subject unless you pay attention to the lyrics.  While I love the harder-edged closing track, "Runner", "Mars" is the other track on the EP that I would nominate as a standout.  Featuring a swinging retro-vocals and some excellent and varied guitar riffs, the track builds from a simple opening to the kind of pop song that has everyone jockeying to dance with "the one" at the end of the party.