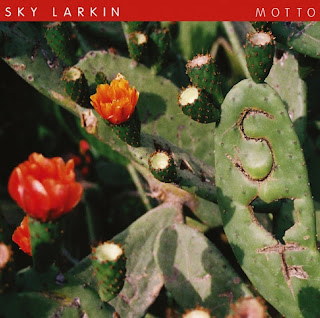 Motto is the new album from British guitar rock band Sky Larkin, and it arrives with passion and fury that makes it very memorable. From the opening, ragged guitar strains and slow-building-to-breakneck rhythm section of the title track, this album is off to the races -- easily evoking indie rock favorites like Foo Fighters, Pixies, Sebadoh, Breeders and, of more recent vintage, The Joy Formidable. They have a big sound - heavy, hard drums, tough guitars and a strong, clear female lead vocal courtesy of Katie Harkin. That's the other co-founder, Nestor Matthews, on drums. Here's the title track, "Motto":

Harkin and Matthews met in school, and formed the band in 2005. After a couple of albums and successful tours with other well-regarded indie bands, the band took a hiatus during which Harkin toured with Wild Beasts, while Matthews recorded with Menace Beach and Giant Fang. The band, now re-assembled with additional members Nile Marr (AKA Man Made) and Sam Pryor (of These Monsters), spent this past winter writing the new record in Yorkshire before heading into the studio with John Goodmanson, known for his work with Sleater-Kinney, Los Campesinos! and Girls.

Here's "Loom", a beautiful rock track about someone she misses - at 2:15, the shortest and most immediate track on the record :

An endearing characteristic of Sky Larkin is the way they accomplish the difficult feat of making music that's able to grab your ears immediately and make you want to come back over and over. And that's the goal, according to Harkin: "I've always wanted our records to be immediate at their most accessible, and at their most expansive, inhabitable. I really wanted to make something beautiful that wasn't also permissive." Between the immediacy of tracks like "Loom" and "The Loyal Beat" and the extended guitar workouts of "Frozen Summer" and "Italics", they've done it here. Learn more, listen and buy at the links below.