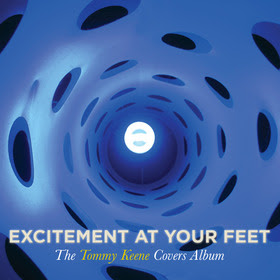 Tommy Keene is a guitar rocker extraordinaire, and his best power pop is as good as that stuff gets. His latest album, Excitement At Your Feet, consists of covers, some well-known, some that would considered "obscurities" by most rock fans, but all of them just fantastic. In fact, this might be the best album I've heard in 2013 -- and I've heard a lot. From the outset, where The Flamin' Groovies "Have You Seen My Baby?" is interpreted as one of the best barroom rock-outs you will hear this year, it's off to the races.

Of particular note is the drumming of Rob Brill, whose work on that song, as well as "Choking Tara" and especially "Out of the Blue" help transform them into something that, while certainly indebted to the originals, is in a way, more powerful. Keene recorded most of the album himself, but apparently the drums were done at Ardent Studios... like so many other great things.

Here's "Choking Tara" - you could damn near overdose on the guitar jangle:

And here's what has turned out to be my favorite, a straight-ahead guitar rock take on Roxy Music's "Out of the Blue" - a great song, and this is one of those covers that made me go back and "reappreciate" what has always been one of my favorite Roxy Music songs. The drumming, especially, is spectacular, and the guitars just soaring:

There are a few slower, frankly very pretty cuts: Donovan's "Catch The Wind" features some tasteful acoustic guitar with Keene's vulnerable vocal, and a piano-based version of the Bee Gee's "I Laugh In Your Face" is a majestic power ballad based on an early Beatles-inspired bit of psychedelic folk rock from the Brothers Gibb. And his take on Big Star's "Nighttime" is right on - capturing the pathos inherent in the Big Star story that's been rehashed so much this year.

As they say, not a speck of cereal. Before I popped the disc in, I knew Keene covering Roxy Music was going to be something special. He has impeccable songwriting chops, and even though this is a covers album, his creativity and songcraft are fully evident. There's a reason Robert Pollard was willing to take his name on the Keene Brothers record, isn't there? But on Excitement At Your Feet, I think it is possible that his taste in songs is even better.

This is a guitar rock fan's dream come true. It's got Who and Stones cuts that are just old enough that I welcome an update. It features down-and-dirty rock anthems by The Flamin' Groovies and Mink DeVille. And I haven't even mentioned how good the Echo & The Bunnymen cover is. And Television's "Guiding Light"! Swirling, whirling oceans of guitar jangle, perfect pacing and a vocal that is just different enough from Verlaine's to make you reconsider this great song a bit. You know how good this record is? While I'm listening to it (the Roxy and GbV cuts in particular), I don't want to listen to anything else.

Just listened to it once thru. Bloody brilliant as our friends from across the pond are wont to say. Tommy always chose covers well in a live setting but there it felt as if he were winging it. Not one note is misplaced or not lovingly played. This is a tribute to song and that initial feeling one experiences when stylus hits vinyl. Tommy Keene shares with us a very personal experience: he's sharing that funny feeling we get in the gut and at the back of the k
neck when we listen to a new piece of music. Thank you, Tommy.

Mark, thanks for visiting and obviously I agree wholeheartedly. It doesn't hurt that Tommy and I appear to have very similar taste in music, and I gather you share it as well... and yes, nothing like getting a new record that just knocks you out. Like this one.