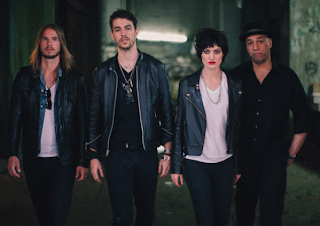 Claiming influences from 70's punk (including, somewhat obviously, Blondie) to 80's drum-based New Wave, to 90's grunge, Brooklyn's The Never Evers do sound to me like heirs to the grand NYC tradition of bratty-sounding punk bands, but are incorporating both post- and pre-punk rock moves as well. They've released a 2-song 7" and here's a taste of their music:

I think there's some soul in that chicken-scratch lead guitar the song opens with. Here's an introductory video they made recently:

The Never Evers from Bedford + Bowery on Vimeo.

The band consists of Kit Vale from Toronto, Canada, Tony Sjoman from Gothenburg, Sweden, Robert Lechner from Erie, Pennsylvania and Walter Gardner from Chicago, Illinois. She's a good singer, and the band definitely has some chemistry - I like the way the drum an
d bass move things along, and there's some nice surf guitar on there, too.

Follow them, learn how to buy the music, and check out upcoming tour dates at their Facebook page.
Posted by John Hyland at 9/04/2013