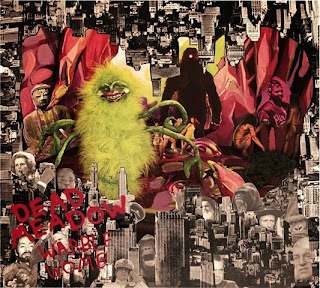 Dead Meadow has a new album, Warble Womb, coming soon, and that's great news for fans of heavy psych (like yours truly). While their label, Xemu Records, has given us two of my favorite albums of 2013, Matthew J Tow's The Way of Things and the self-titled Strangers Family Band, Dead Meadow themselves haven't released an album in years.

They've given us every reason to be excited about the upcoming release - three songs have surfaced, all with great guitars and heavy rhythms. Here's "Copper is Restless ('Til It Turns to Gold)":

Here's a new live in-studio performance by Dead Meadow of album track "In the Thicket":

And here's a link to listen or download album track "Yesterday's Blowin' Back".

And it's not like they're giving the whole thing away - there's plenty more to look forward to. It's reported to be a 75-minute double album... so plenty of room to stretch out.

Sounds good to me