New Pop/Rock Discovery: Lots of Love - From The Start 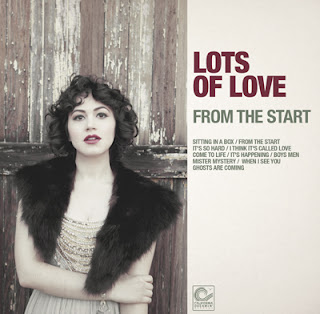 Jessica Fleischer is an LA-based singer/songwriter with a light, clear voice and a very well-developed set of pop sensibilities. She's just released her debut album, From The Start, under the name Lots of Love. She cites as influences Electric Light Orchestra and 60s girl-groups, and I concur. It's nostalgic and she's got a sweet voice, with some contemporary touches - some reverb on the vocals, and on some of the tracks, particularly on "Sitting In a Box" and "Boys Men", a bit more jangly guitar than either of those two influences she mentioned.

She had help on this record from a longtime friend, Robert Schwartzman, of the band Rooney - it was recorded at his home studio.

Asked to name the song that best represents her as an artist, she named “I Think It’s Called Love,” explaining “It gets into my personal experiences moving beyond those feelings of frustration and desire, and towards a realization that everything is okay the way it is.”

Here's the title track - this is a very nostalgic approach, bringing to mind something like '60s girl groups filtered through the musical Grease more than ELO - a charming approach:

And here's a video for "Come to Life", with a similar approach:

Stream the whole album, and learn more at her website.