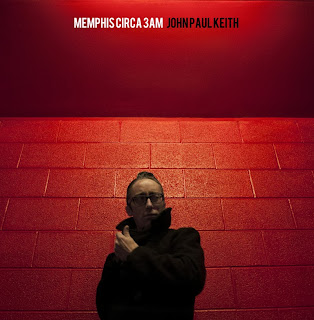 John Paul Keith is a Memphis-based singer-songwriter with a great musical grounding and the kind of pop sense you don't see often. His new album Memphis Circa 3AM features guitar jangle, rockabilly boogie and soul, all over a country rock/Americana base. Keith is a Knoxville native, former member of the V-Roys, a stalwart of the E-Squared alt/country scene in the 90's who released three strong albums before breaking up. Having formed a band in Nashville, tried the major label route and several other options, he eventually settled in Memphis and connected with veteran Memphis producer Roland Janes. Keith and his band The One Four Fives (drummer John Argroves, organist/pianist Al Gamble, and bassist Mark Edgar Stuart) are making a racket that calls to mind some of the best of that city's rock traditions. Opening track features a rhythm line that put me in mind of Elvis' "A Little Less Conversation", and the next track "We Got All Night" is the kind of California country once put forth by the legendary Wrecking Crew (including some reverb-heavy guitar work by Keith). Producer Janes once played guitar for Jerry Lee Lewis, and on "True Hard Money" here, Keith certainly calls to mind the Killer's reckless boogie-woogie, rockabilly style (including a pretty decent take on his vocal style).

Traces of British Invasion guitar pop, terrific organ fills - this is, to me, kind of at the intersection of country, rock and pure pop where artists like Tom Petty, Dwight Yoakam and The Mavericks have made their living. And here's a softer, sadder but every bit as catchy tune, "She's Almost You":

Keith has an impressive ability to change his vocal style to suit the song, and an impressive ability to write in several different styles - aside from the aforementioned variety, check out the full-on country song "Ninety Proof Kiss", the folky "Walking Along the Lane", the Tennessee Three rhythm in "There's A Heartache Going 'Round" and the deep soul of "New Year's Eve" (featuring big-time keyboards from Gamble and even a couple of different guitar sounds from Keith). From Knoxville to Nashville to Memphis, it's clear his decade-long journey across the state and around the world has led him to the right place. This is a terrific, big-sounding, rollicking album that just keeps on delivering. Out now (Sept. 17) on Big Legal Mess,