Review: Over the Rhine - "Meet Me at the Edge of the World" 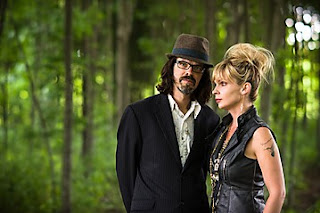 Linford Detweiler recently told David Greene of NPR: "Somebody said that there are only three subjects available to the writer: God, love and death. And we try to write about all three."

Detweiler and his wife Karin Bergquist are Over the Rhine and they have been covering those topics in their music for two decades now. Meet Me at the Edge of the World is their 15th record and it's a career defining work - 2 CDs, 19 songs  - beautiful, deep , ambitious, and jaw dropping. With songs about, yes, God, love and death, and also marriage, and Ohio, and trees and sunsets, and finding one's place, and lust, and so much more, all with far more emotional depth than any listener will take in via a casual listen.

I could go on and on but let's listen to some songs from this great record.  Here's one of my favorites: "I'd Want You":
"Sacred Ground":

The record was produced by WYMA hero Joe Henry (his studio shown above in the "Sacred Ground" video) who lets Bergquist's gorgeous and nuanced vocals carry the songs. But like the lyrics and compositions themselves, the more you listen the more you uncover in the musical backing here, with Jay Bellerose's percussions (check out "Blue Jean Sky"), really fine bass playing by Jennifer Condos, and occasional additions of pedal steel from Eric Heywood, and other small flourishes, including backing vocals by Aimee Mann on the gray hypnotic "Don't Let the Bastards Get You Down".

But the real instrument here is Bergquist's voice. She dives so deep into the song it's almost scary, mining every emotion out of each phrase, every observation, each feeling. And she effortlessly takes on different styles, with her phrasings and tone adjusted when she moves from the more folk singer-songwriter songs to the gospel of "Gonna Let My Soul Catch My Body", the blues of "Baby If This Is Nowhere" or the quiet anthemic pop of the terrific title track "Meet Me at the Edge of the World" that opens the record. And nowhere do her vocals hit you in the gut more than on the one cover here, The Band's "It Makes No Difference". Her delivery of the line "I love you so much, it's all I can do" is absolutely heartbreakingly perfect.

But you can pick any one of the 19 songs here, dive in and find yourself uncovering layer after layer of beauty and emotional depth. The song that has me most hooked today is "All Of It was Music", which,  to give you an idea of level of writing here, concludes with these lyrics:

The holding on the letting go
It all get buried soft and low
Don’t ask me how but I still know
All of it was music
To those I’ve wronged, Please forgive me
I hope this song, helps you believe me
This world so full of joy and pain
Was more than one heart could contain
We let it spill and flood the plain
All of it was music

This is an extraordinary record, the quality of work that one rarely finds unless they are digging back into their Leonard Cohen and Joni Mitchell records.

Over the Rhine is on tour now. Tour dates and more can be found at their web page: