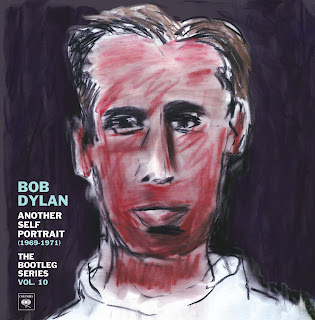 The trouble with writing about Bob Dylan is that his music is complex, cuts deep, and the context is always voluminous. One should write books on it, not blog pieces. So excuse me for writing briefly and in many ways merely on the surface.

But, here's my simple thesis: any Dylan fan, even a somewhat casual one, needs to own the latest in the terrific Bootleg Series, this being volume 10. The 2 CD set includes 45 songs, some unreleased and some earlier versions of songs that appeared on Self Portrait and New Morning. There is also a deluxe 4 CD set with a complete live concert and more. I'm still digesting and digging through it all, but my oh my, what a treasure trove of heartfelt, beautiful performances.

Here's a cool trailer about Another Self Portrait, setting some background:

Self Portrait was famously vilified when it was released in 1970, the rock music critics and mass public annoyed that their hero had made a disjointed record mainly of obscure covers, and containing none of the soaring rock'n'roll that had transformed the music world.

But time is a funny thing. These unreleased tracks, which extend what Dylan was doing on Self Portrait, would not have been well received in 1970 either, but right now they make perfect sense. Dylan's folk and blues roots have been on display for many parts of his storied career. So the Self Portrait retreat, if we can call it that, no longer seems bizarre, and certainly not infuriating (as many found it in 1970), but more like a smart move, a survival instinct kicking in. This is exactly the step back, the self-preservation instinct, that maybe Kurt Cobain or Janis Joplin could have used. Stoking the star maker machinery is not easy, nor is having young kids and trying to raise them in the midst of it. So if people felt let down by Self Portrait, too damn bad. It's not like it erased Blonde on Blonde;or people still couldn't go listen to any of his previous records whenever they wanted.

So the final part of my simple little thesis here is that maybe one reason we still have a vibrant, engaged Bob Dylan around in 2013, touring and creating great new music on Tempest, is that he knew how on occasion to step away from the madness and back into himself, and back into the music that restored him, fed him, inspired him, made him content. And that music was traditional folk and blues, on display in the 45 songs here. So much of this is absolutely wonderful. Let's start with just one track by way of example because it also has a terrific video, "Pretty Saro":

I love Dylan's love songs and find them generally vastly underrated and taken for granted. The singing on "Pretty Saro" is exquisite. And while many of these songs appear to be recorded casually and are unadorned, the vocals sure as hell were not tossed off. Dylan's singing is terrific throughout.

Highlights - "Thirsty Boots" (written by Eric Andersen); "Spanish is the Loving Tongue"; "These Hands"; alternate and in my view superior versions of "Went to See the Gypsy" and "Copper Kettle"; and fine early versions of two of my all time favorites "When I Paint My Masterpiece" and, speaking of great love songs, "If Not For You".

For at least awhile, you can stream the music at NPR's site: NPR First Listen. Or here at Bob Dylan's official web page (a very well constructed site if you've not visited there before).

Overall, I find Another Self Portrait a deeply rewarding glimpse into Dylan's artistry and what makes him tick, the music he makes when no one is listening. I am so happy to be able to hear this.  I am still taking it in, but want to get this up on our blog as quickly as possible so you can do yourself a favor and get to the store now. Dylan fans need to own Another Self Portrait.

This is a nice overview, JD. I like the idea of "old songs" as a wellspring for Dylan. Another element I was thinking about is, people at this point are probably nostalgic for Dylan's 1970-era voice - even though many hated his voice back then, everybody knows what a singular artist he is and they miss that old thing now that it's so ravaged by time, age and 300 shows a year. Complaining about Dylan's voice - a growth industry since 1961!