REVIEW: Left Lane Cruiser - Rock Them Back To Hell 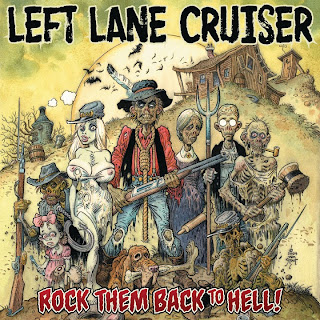 Left Lane Cruiser is a duo playing heavy, dirty blues-rock. If that makes you think Black Keys, White Stripes, so much the better. They're definitely in that vein - substitute Ft. Wayne, IN for Akron, OH or Detroit, MI. On Rock Them Back To Hell, their latest album, they worked with the great Jim Diamond (Ghetto Recorders, Detroit MI: White Stripes, Dirtbombs, The Pack A.D., Ponys, etc etc etc).

They're drinking 40s from paper bags! There's a clear message being sent here, and you will be awarded points for picking it up. The souls of old hard-drinking Southern bluesmen reside in these two young Indiana musicians, and these souls want to get out. Bad. They are going to make a hell of a racket on their way out, too.

Here's "Juice to Get Loose":

There's good slow blues here, too - "Coley" is one where they dial it back a bit, and it's got some pretty acoustic work. But the guitar playing on tracks like "Jukebox" and "Paralyze Ya" is incendiary, and there's no way you won't test the max volume of your speakers while listening to this album. It's not a headphone album, it's a "loud in the car" or "disturb the neighbors" kind of album. Thanks, as with so much good blues-rock, to the fine people at Alive/Naturalsound. Read more, check out tour dates and previous releases, and best of all, buy this thing at the links below.