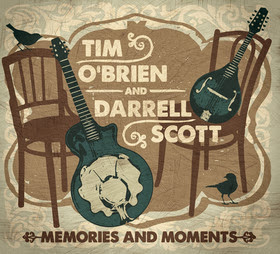 Tim O'Brien and Darrell Scott are Americana royalty. Among other achievements, I have always treasured O'Brien's 1996 album of Dylan covers Red on Blonde. Their talent is also highly sought after in mainstream Nashville country, where the competition to have songs recorded is fierce. You would be hard-pressed to find another duo whose songs have been recorded by chart-toppers like The Dixie Chicks, Dierks Bentley, Nickel Creek, Kathy Mattea, Faith Hill, Guy Clark, Sam Bush, Brad Paisley, Sara Evans, Garth Brooks, Patty Loveless, Trace Adkins and Tim McGraw. This partially explains why, after their 2000 record Real Time met with such universal acclaim, it still took 13 years for them to find the time to record a followup. But man, was it worth the wait. I have rarely heard a duo with such perfect vocal harmonies and such perfectly coordinated instrumental runs. On some of the longer songs, they really stretch out and play - check out "Fiddler Jones":

Scott's from Kentucky and O'Brien from West Virginia, but even without knowing that, anyone listening can tell they come by their mountain music credentials honestly. Add to that their willingness and qualifications to address mountaintop removal and the legacy of mining in that part of the world: note their dead-on take on John Prine's "Paradise" (including a version with Prine himself), which plays off their original song "Keep Your Dirty Lights On" - odes to a back-breaking legacy and mountains removed, never to return, so a growing nation could have power and "Mr. Peabody" could keep his coal train filled.

There are common country and mountain music themes - religion ("On Life's Other Side"), family ("Memories and Moments"), love both found ("Angel's Blue Eyes") and lost (an absolutely devastating, mournful take on Hank Williams' "Alone and Forsaken").

And the album features unadorned traditional country and mountain music instrumentation - just perfect interplay among resonators, acoustic guitars, fiddles and mandolins. The album is on a newly formed label, Full Skies (a combination of Scott's Full Light and O'Brien's Howdy Skies) and distributed via Thirty Tigers. It's wonderful in every way - great singing, great playing, and you can feel their love for the music. You can buy it at their combined website (link below) - either digital or physical CD.