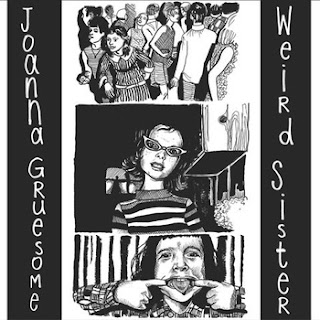 This will be a short review. I love this album - really, everything about this band's sound. WYMA has been fortunate to receive two advance singles, so you are welcome to read my previous ravings here and here. Joanna Gruesome is a Welsh band that calls to mind such greats of guitar rock as Teenage Fanclub, Dinosaur Jr., The Pixies, The Breeders and, to my mind, The Lemonheads (especially when Dando brought Juliana Hatfield in to sing some).

In short, it's an explosion of glorious noise - fast drumming/bass work, layer upon layer of guitar, with plenty of feedback, and female vocal harmonies that are positively luminescent. I take it the subject matter is dark - the band describes it as such, and titles such as opening cut "Anti-Parent Cowboy Killers" would seem to bear that out. The band claims to have written a lot of the album "during a month long stay in a seedy west Brighton hotel (now closed down) called The Hell House... many of the songs were written to distract from the weirdness." This tells me something about the band's talent, because this stuff is really kind of glorious.

If you like fast, thrilling, noisy rock music with generous slabs of guitar, offset by male/female harmony vocals that are, at times, almost angelic, this is for you. It's a fantastic ride.

See? I told you it would be a short review.