"Hindsight" by The Stevens 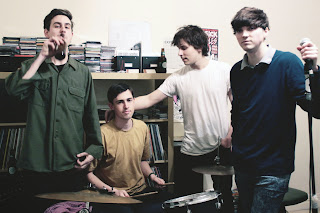 The alert reader may recall that this isn't The Stevens' first mention here.  In February we featured the Melbourne band's debut EP (link) and announced that their debut LP would be released via Chapter Music later this year.  The date for that album, titled A History of Hygiene, is November 1, and I'm really looking forward to it.  Guitarists Alex Macfarlane (also drummer for Twerps) and Travis MacDonald, along with bassist Gus Lord (also of Boomgates) and drummer Matt Harkin have a classically scruffy but melodic guitar pop sound that translates to permanent earworms upon impact.

The old saying is that hindsight is perfect.  That may or may not comport with your experience, but I can tell you that "Hindsight", the first track released from A History of Hygiene is a near perfect guitar pop song.  So go for the sure thing -- stream the song and then hit the Bandcamp link below.