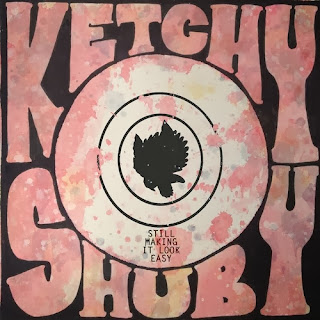 Ketchy Shuby is a six-piece soul band from Miami, FL. They're playing a wildly creative mix of soul, pop, psychedelia and even some "musical theatre", Zappa-style freakouts. The band consists of Jason Joshua Rodriguez on lead vocals/guitars alongside his funk-soul brothers, Danny on percussions, Rob on sax/flute, Charles on organs, Matt on bass and Andres on drums. I have always loved soul music with a flute - especially with that Cuban influence, which you'd certainly expect in a Miami-based artist. But they really meld a lot of different styles - Latin, yes, but also reggae and good old soul and funk. Named after a Peter Tosh song, they play it pretty upbeat - here's "Smile", which starts off with a reggae beat:

And here's the goofy, but very musical "Super Mystery Friends" - they really let the horns take over the last half of the song:

I can easily imagine these six putting on a rousing live show - it's a conglomeration of musical styles and a party spirit that represents their hometown well. Here's a live clip from a recent Miami Beach appearance:

The album is out today (Sept. 24) on Pugilista Trading Co.