Though they will tell you otherwise, the Midgetmen (once referred to as Austin's "slop punk mavens") care about you and about the sounds that go into your ear holes.  Sure, they formed with the intent of playing a single noisy show and then breaking up.  It is also true that they changed that plan when they realized that being in a band can get you free beer.  Since that awakening, the Midgetmen have chugged along, literally and figuratively, for nearly 11 years, gradually becoming the "old men" of Austin's DIY guitar rock scene.  Along the way, they've released several records (one of which, Loud Enough, was reviewed on this blog right here), played tons of shows, toured various regions of the US, handed out free beer and odd freebies to their friends and fans (fried chicken, champagne, and iPods come immediately to mind), briefly morphed into a Weird Al Tribute Band at Fun, Fun, Fun Fest, and had the good fortune to play shows with the likes of Titus Andronicus, The Wrens, the Henry Clay People, and many others.

About 7 years ago, after unsuccessfully trying to bribe their way into SXSW with a Midgetmen labeled bottle of MD 20/20 ("MM 20/20")(a/k/a Mad Dog), they decided to start their own show, the Texas Jumpstart, which, over its five year life, has become the best and most consistent single show during SXSW.  Thanks to the Midgetmen's commitment to find great bands to play the Jumpstart (particularly that of their bassist and promotional guru Marc Perlman, who spends days, if not weeks, listening to hundreds of bands to "curate" this show), the Jumpstart has featured bands like the Henry Clay People, Grant Hart, Ezra Furman (both solo and with the Harpoons), Country Mice, Golden Dogs, the Breakup Society, Hounds Below, Plants & Animals, the Gay Blades, Palomar, Spinto Band, AA Bondy, Franz Nicolay, Shilpa Ray & Her Happy Hookers, and Hollerado.

Despite the absence of some of last year's standouts from SXSW this year (and therefore from the Jumpstart as well), this year's Jumpstart promises to be the best ever.  If I told you that there was going to be a free show that included PAWS, Diarrhea Planet, Spider Bags, Hounds Below, Warm Soda, the 4onthefloor, BRONCHO, Team Spirit, Automagik, the Sights, a band called the Beards that only plays songs about Beards, exciting young newcomers Audacity and  Big Ups, as well as the show patrons, The Midgetmen...

Of course you would!

Lucky for you, I am telling you that this free show is taking place on Thursday, March 14 at Side Bar beginning at Noon.  If past experience is any indication, this will be the best show, from beginning to end, at SXSW 2013.  For your rock and roll previewing experience, the Midgetmen have created a YouTube Playlist so that you can get up to speed on what you are going to see (or what you are missing):

In the event that you prefer streaming audio, here are some songs you might/should hear at the show:


Learn how to make a free Electronic Press Kit


By the way, in the interest of full disclosure, my brother is in the Midgetmen.  However, don't let that "bias" dissuade you from attending this show.  The Midgetmen don't make a dime off of this event.  In fact, they lose money on it.  And they do it all for us. 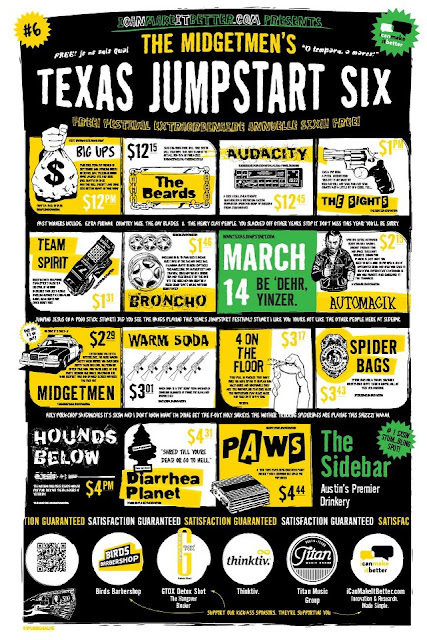 the 4onthefloor will rock everyone to the core. STOMPIN good rock n roll.