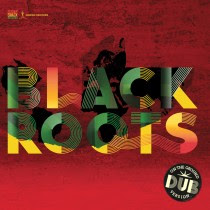 If one truly loves reggae, and I do, one cannot ignore the genre's development outside Jamaica.  In particular, the Caribbean diaspora to the UK resulted in a thriving reggae scene, spawning lovers rock stars, influencing rock bands (e.g. The Clash), providing a touring outlet for traveling Jamaican artists, influencing the two-tone ska movement, and nurturing a number of very good UK-grown roots bands.  Among the latter is Bristol's Black Roots.  Formed in the early '80s, it was a true band (multiple vocalists, keys, guitars, bass, dual percussionists) rather than a vocal group backed by hired instrumentalists.  While the band enjoyed a fair amount of success in the UK, until recently they had gone two decades without releasing new music.  In September 2012, Black Roots released a very good roots album of new material, On the Ground, on Mike Darby's Sugar Shack Records and Nubian Records.  Now, Sugar Shack and Nubian have released a dub version of 15 of the 17 tracks from the September album -- On the Ground In Dub.

The best dub is more than an engineer's art.  If the original material lacks the melody, rhythm, and vocal hooks, even the best dub master will risk turning out something that resembles a science project gone wrong -- all bells and whistles and no soul.  But there is no such danger here, as On the Ground not only is a fine album, but it contains the elements needed to create a dub version.  Stage two, the work of the engineer, is top notch in this case.  At the hands of Louis Becket working at J & J Studio in Bristol, the bass pulses, the horns punctuate the rhythm, and the vocals ghost in and out.  Moreover, Becket is to be lauded for his restraint. In stripping down the original material and building the dub, he was sufficiently confident in his choices that he didn't drown the final tracks in excessive effects (and leaves me with the intent to check out other work by Louis).  The result is vibrant, breathing dub, and deserves the attention of anyone who enjoys reggae.  And to pick out a song for which I don't have a stream to share with you, "Oh Mama Africa Dub" is pure joy.