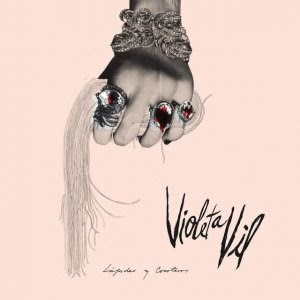 Spanish trio Violeta Vil is playing dense, majestic rock music. On their new album Lapidas y Cocoteros, the guitars and keyboards are layered, the vocal harmonies are soaring and they display a familiarity with a number of musical styles. The ladies in the band are originally from Venezuela, Chile and the Canary Islands - which explains the strong affinity this music has to Tropicalia and specifically to South American artists like Los Aterciopelados' Andrea Echeverri.

In the words of the band, the songs on this album "explore the dark underside of paradise, where old time superstition clash and mingle with the 21st century." That gives a very good underpinning to the marriage of 21st century shoegaze guitars/synths with traditional Spanish rhythms, and the somewhat inspired use of folk art in close proximity with 20th century surrealist (absurdist?) images. Here's the video for the title track (translation, "Headstones and Coconuts"):

Here's a video for "La Pericona" - the guitars are a little more unhinged in this one, something I enjoy:


Their musical journey has taken them from South America to Spain, and with the help of Austin-based label Young Cubs, they would like to begin to conquer the US. They're off to a good start.