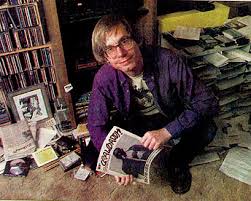 Paul Williams died Wednesday at age 64. This blog and any media outlet that writes about rock music with any degree of seriousness owes a huge debt to Paul Williams, one of the very best music writers who ever lived.

Williams founded Crawdaddy!, the first magazine devoted to covering rock music, in 1966. It was a highly influential journal, pre-dating and serving as the thinking man's Rolling Stone. John Lennon, Joseph Heller, Cameron Crowe and countless other influential writers and artists published pieces in Crawdaddy!. Crawdaddy! was the first place where feature stories appeared about Bruce Springsteen, Gram Parsons and countless others.

Williams sang on "Give Peace a Chance" recorded by John Lennon and Yoko Ono in a Montreal hotel room in 1968.

Crawdaaddy! later came back under Williams' control as a subscription newsletter from 1993-2003. It eventually gave way to the digital age where Williams lengthy and authoritative pieces didn't fit as well.

Williams wrote with insight, authority and passion. He took music writing to a height that often soared far above the music he wrote about. He was a true artist, a music fan of epic proportions, and a kind soul.

I had the great privilege of meeting Williams in person once in 1993 here in Portland where I attended a Bob Dylan concert with him, which was rather like going to Mass at the Vatican with a Roman Cardinal. After that meeting, I became a contributor for the Crawdaddy! newsletter, which I always found a bit intimidating, though an honor, and Williams served as an insightful and supportive editor.

Williams suffered a serious brain injury in a bicycle accident and had a tough road in recent years. Our thoughts and prayers go out to his wife Cindy Lee Berryhill, a very talented singer-songwriter, and another kind soul and beautiful person.

Here's a lovely piece about Paul written by his friend and mine Denise Sullivan: http://denisesullivan.com Paul Williams

I wanted to compliment you on this post. I respect Williams's work, but I hadn't heard about what had happened to him in recent years. A very fine appreciation.

I've been following this blog for a while now. I write a blog that focuses on the music scene in Idaho (I'm working on posts for the Treefort Music Fest right now). If you'd like to take a look at it sometime, I'd be interested to hear your thoughts. Its address is herecomesthedumptruck.blogspot.com.