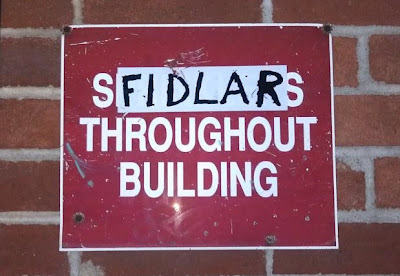 The first "official" show that I saw at SXSW 2011 was a completely unknown (to me, at least) band called FIDLAR, which, the band advised, stood for "Fuck It Dog, Life's A Risk."  Admittedly, we went to see them because we didn't really have a better choice in that early Wednesday slot.  Their SXSW site demo sounded like young, energetic California stoner, skater punks.  How could that not be, at least, interesting?  A song or two into FIDLAR's set made it clear that they were a lot more than just interesting and they had the small crowd fist pumping and chanting along with the chorus of "Cheap Beer" ("I drink cheap beer, so what, fuck you.") They have since made a great video for that one:

There could not have been a better way to kick off the official SXSW shows.

By the time FIDLAR had told the crowd where, along the highway, they had buried their drugs and finished ripping through their set, it was clear that FIDLAR was on the verge of something special. Maybe they weren't the next Nirvana, but maybe they were. Like Nirvana, it was clear that these guys had an uncanny ability to combine memorable pop hooks with punk rock, lyrics with attitude, and angry guitars in a blistering live show that inspired kids to immediately want to pummel each other. Clearly, something special was brewing.

Then came the videos, discovered after SXSW, which are some of the best DIY rock videos ever created. These wonderful and bizarre collections of pictures, found footage, and home video capture the F.I.D. attitude that the closer-to-mainstream rock scene was (and still is) largely missing. For example:

I tracked FIDLAR down again at SXSW 2012.  Thankfully, it wasn't hard as they seemed to have the Filter machine behind them and were playing a lot of shows.  They were even better the second time around in shows that whipped the crowd into an old school frenzy, like this:


This year, as a later addition to the SXSW schedule, they are a must see act as they are supporting their first full length release and one of my favorite records so far this year.  You can read Rocksteady's great review here.  Please, go see FIDLAR.

(This is the fifth in a series of SXSW Previews.  Please check out PAWS, Spider Bags, Rah Rah, and Diarrhea Planet at SXSW as well.)