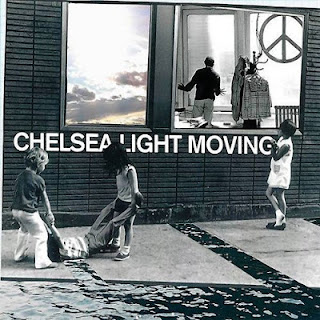 Back about 8 months ago, we received a note about Thurston Moore's new project Chelsea Light Moving. In addition to Moore, the group features Keith Wood, John Maloney, and Samara Lubelski. At the time we noted the poignant story behind the song "Groovy and Linda" as well as the guitar shredding on "Burroughs" - WYMA post here.

The self-titled album is finally out- released March 5 - and it is, in a word, fantastic. Turns out the aforementioned advance songs represent a very high level of songcraft and guitar work that is sustained throughout the record. The spoken word piece "Mohawk" is about as subdued as it gets, which means this is a very wild affair. And, to me, that is a very welcome development.

Sonic Youth fans will certainly recognize the guitar freakouts, the VU-influenced late-night rambling beat poetry lyrics, and I would think most will welcome them. I know I do. The longer songs tend to feature rambling solos, the shorter numbers (opening cut "Heavenmetal" for example) are catchier and a bit more melodic. Here's a link to "Empires of Time" - a 5:00 song that starts slowly but features the fast/slow dynamic and builds to a crescendo.

And here's a video of "Allighted" from a recent live performance - making good on Moore's promise, apparently articulated in the comments section of the music blog Brooklyn Vegan, to "detonate" a birthday party or wedding reception:

And here's a video for "Burroughs":

Psychedelic, sprawling and savage, Moore's guitar playing is completely undiminished, and this is a really good collection of rock songs - there is not a weak cut on the record.