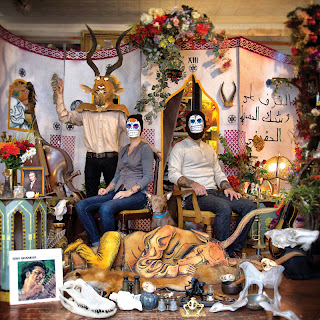 Providence, RI's Brown Bird is playing a variety of folk rock that has a foot in the present and one in the past. There is plenty of acoustic playing and vocal harmonizing - in places, they could be a 30's string band that travelled forward in time. But there's also some very good rock instrumentation - the guitar riffing on "Barren Lakes" is reminiscent of Sonic Youth, to me.

It's a duo: guitarist/percussionist/singer/songwriter David Lamb and MorganEve Swain on violin, cello, upright bass, electric bass, vocals. Obviously, they each wear a lot of hats. Listening to the record and keeping in mind there are only two of them, you'll be impressed at the variety of sounds and the electric/acoustic interplay, and at the same time unsurprised at the tightness of the harmonies. Lamb does most of the singing, but Swain's voice is light and clear, and whether she's supplying a counterpoint to his ragged vocal style or taking the lead here and there, she's a terrific vocalist.

Here's lead track "Seven Hells", a perfect example of the way Lamb's baritone vocal and heavy guitar combine with Swain's bass and harmony vocals to create something exhilarating. I have seen Brown Bird compared to Tom Waits in a few places - this, to me, is the closest their music comes to resembling his:

And here's "Nine Eyes", which showcases the Eastern influences (while retaining the rock elements that, to me, help make Brown Bird so listenable):


The record is out next Tuesday (Apr. 2), and to support, they're going out on tour:

It's good music and I think seeing them live would be fun, if for nothing else, to see the two of them produce all this sound while creating the basic rhythm with their feet!