REVIEW: The Replacements "Songs For Slim" 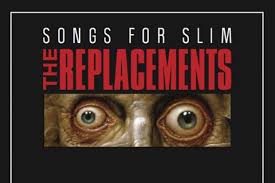 It being the first Replacements record in 23 years, we certainly aren't going to complain that Songs for Slim is just a 5 song EP. But nor are we immediately jumping through the rafters since the impetus of this record is to raise money for 'Mats guitarist Slim Dunlap who suffered a major stroke and has significant unfunded long term disability needs.  These all too frequent stories of musicians without adequate health insurance always bum me out, but this a bit more so because people I know well are friends with Slim and tell me he is a great guy.

But even if I didn't have friends telling me that, Slim Dunlap would still be the Replacements guitar player from the 2nd half of their career after Bob Stinson left the band, and that alone would be plenty reason enough for me to want to support this. 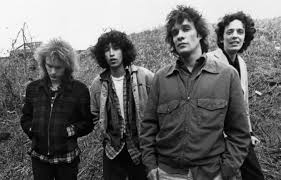 Picture above - The 'Mats from back then: from left, Tommy Stinson, Chris Mars,  Paul Westerberg, Slim Dunlap

To say that I love the Replacements would be an understatement, so this release is a big deal in my book. And it is completely successful, actually managing to stand up to the 'Mats revered catalogue.

All 5 songs are very good. We'll take them one at a time:
"Busted Up" was written by Slim Dunlap, and has a great, almost Little Feat boogie feel. Paul Westerberg sounds terrific.
"Radio Hook Word Hit", another song from Slim, was recorded, performed and sung solo by Chris Mars and it is a tremendous rock'n'roll song. Mars was always the unsung hero of the 'Mats, not just a great drummer, but a guy with a terrific ear and good taste who balanced the gifted Paul Westerberg's mood swings and inconsistencies.

Next up are three covers -
"I'm Not Sayin'", a Gordon Lightfoot song, fantastically covered with the 'Mats signature pop-rock/ bar band style (listen here);
"Lost Highway", penend by Leon Payne and made famous by Hank Williams (long a Westerberg hero); and
"Everything's Coming Up Roses" (which of course it never did in the Replacements world and certainly isn't with Slim's illness now), by Stephen Sondheim from the musical Gypsy.

Covering Gordon Lightfoot, Hank Sr. and a Broadway musical might seem a stretch for normal rock bands, but was the kind of thing the Replacements routinely carried off. And more to the point, these aren't goofs, they are the kind of well written, if eclectic songs that influenced Westerberg's exceptional songwriting and made the 'Mats brand of rock'n'roll so unique and magnificent.

Of course we here at WYMA get flooded with so much modern payola - private jets, opulent Las Vegas listening parties, cold hard cash, women, caviar, you name it - and we certainly never have to buy (ha!) CD's. But we did buy Songs for Slim and you should too. Get to your local independent record store today and tell 'em When You Motor Away blog sent you. It'll be the best $5 you'll spend this month, and a good guy named Slim Dunlap needs the dough.

A fine article from Billboard.

great write up. couldn't agree more. I'd like, however, to credit Kevin Bowe & Pete Anderson for filling out band. They did a great job as replacement Replacements. If you'd like (& I'm sure you do) Check out the mats Minneapolis soul mates on "Natchez Trace" by Kevin Bowe & the okeman Prophets. It features a new tune written by Paul & Kevinn